These days the debate on immigration is hot, both in the United States and in Norway. In both parts of the world, spiraling numbers of migrants and refugees are seeking better lives, with challenges along the way. Currently there is talk of an immigration crisis at the U.S. border, with families separated and ongoing talk of a wall, and in Europe there are continual discussions of quotas and how immigrants can be better assimilated into society.

Yet the topic of immigration is nothing new, and for Norwegian Americans, it has a long history. Since the mid-19th century thousands of Norwegians emigrated to North America in search of a new, better life, and today it is estimated that the Norwegian diaspora in the United States numbers over 4.5 million. On both sides of the Atlantic, there has been an ongoing interest in how Norwegian immigrants have fared in the New World, in both academic and anecdotal studies.

For the young photojournalist Ingerid Jordal from Voss, Norway, a curiosity in Norwegian America was sparked when she saw images from the Midwest in a photo reportage a few years back. Her interest deepened when she read about the language of older Norwegian immigrants in a study published at the University of Oslo. She decided she wanted to experience Norwegian culture in America for herself. As fortune would have it, an Oslo Ph.D. linguistics student invited her to accompany her on a new project in the Midwest. It would be her first trip to the United States, and while she was afraid of flying, it was an opportunity too good to pass up. 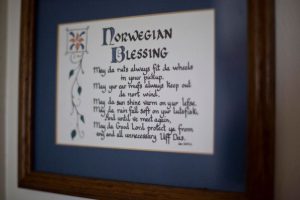 On her travels in the Midwest, Jordal was met with warm hospitality and a nostalgic, idealized view of Norway. Photo: Ingerid Jordal

In Minnesota and Wisconsin, Jordal was impressed by the hospitality of the older generations who received her. Some of them still spoke in the dialects they brought with them from Norway, they preserved the old food customs of lefse and lutefisk, they engaged in traditional crafts of woodcarving and rosemaling, they wore Norwegian sweaters and decorated their homes with Norwegian knick knacks, they attended Sons of Norway fraternal lodges, and above all, they had a very positive attitude about Norway. But while some had traveled there to visit old family farms and relatives, they seemed to know relatively little about Norway today. Just as they preserved their heritage in local museums, their vision was one that looked back in time.

Jordal wanted to meet younger Norwegian Americans, and she decided to continue her trip on to Seattle, a large metropolitan area with a large and more recent set of Norwegian immigrants and a vibrant, progressive cultural life. With her goal to locate younger people, she reached out to the Seattle-Bergen Sister City Association for help. Both Bergen and Voss are part of Hordaland County, and Jordal knew from recommendations back home that it is Sister Cities International’s mission to facilitate cultural exchange, and after a few emails back and forth, a series of interviews were soon set up with a dozen or so contacts from various walks of life. 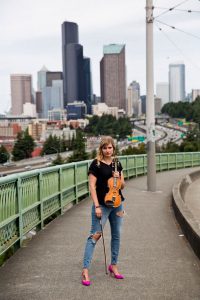 In Seattle, Jordal encountered a younger generation of Norwegian Americans, who were well eductated and knowledgeable about about contemporary Norway. Pictured is Rachel Nesvig, a professional musician who plays the traditional Norwegian Hardanger fiddle. Photo: Ingerid Jordal

The selected interview subjects included an elementary school teacher, an aspiring journalist, a Norwegian-inspired fashion designer who was a Viking re-enactor, a Web developer, an engineering student, a professional musician who plays the Hardanger fiddle, and a financial advisor, who had been part of the The Great Norwegian Adventure “Alt for Norge” television series a few years back. Ingerid also interviewed the editor of The Norwegian American (America’s last and only Norwegian newspaper), an assistant professor of Norwegian at the University of Washington, and the two of us spent time talking about my own work as a journalist. the mission and activities of the Seattle-Bergen Sister City Association, and cultural interaction between the two countries.

In Seattle, Jordal learned that younger Norwegian Americans also have a very positive view of Norway, something learned from older generations and from firsthand experience. It made an impression on her how well educated everyone was and how much they knew about contemporary Norwegian society. Many of them had vacationed or studied Norway, all knew at least a few words of Norwegian, and some were completely fluent in the language. They spoke with praise about the safety net of the welfare state: health care, child support, universal education, better prison conditions, safety and gun control, guaranteed vacation time, and more life-work balance. Some of them even had concrete plans to move to Norway, and she was surprised that many seemed to view her country as a utopia. There was definitely a certain status attributed to being of Norwegian extraction, and all consciously chose to identify as Norwegian Americans.

There were, however, some criticisms of Norway, with complaints about the current government, immigration politics, the “Nordic chill,” and a culture that is not always so friendly to outsiders. These criticisms hit home with Jordal, who throughout her American journey felt she had learned the value of a new openness and hospitality. She was amazed that no one had said no to her along the way as the interviews had been set up, and she had found Americans to be “very friendly and easy-going.” She realized that people back home could perhaps loosen up a bit, that “just because a stranger talks to you on the street or in a shop, it doesn’t mean that they are going to stalk you.” Her overall experience with Norwegian Americans, both young and old alike, had been a positive one.

After her big trip to America, Ingerid Jordal is still afraid of flying, but she nonetheless hopes to come back and explore our country more. For a young Norwegian, it was interesting to see how her culture had been transported and handed down to evolve in its own manner and become something of its own. As a journalist and photographer, she was able to see her own culture through a new American perspective or lens. It was a meaningful journey for Ingerid, and in Seattle, we too, have been enriched by her visit, as we look at the Norwegian American experience through a Norwegian journalist’s eyes for a deeper understanding between our two countries.