From November 15th to November 17th, 2019, delegates from Urbana, Illinois traveled to Thionville, France to help celebrate the 75th anniversary of the Liberation of Thionville from Axis occupation during World War II. The delegates from Urbana attended public ceremonies, parades, and laid wreaths at commemorative monuments during their three day visit. There was also a signing of a new Twinning Cities charter between Urbana, Illinois and Thionville, France, which was then followed by a gala dinner at a nearby chateau. Dennis Roberts, a member of the Urbana community, states, “We returned home with renewed interactive goals and stronger bonds of friendship and understanding”.

There were 250 attendees participating in the celebration. 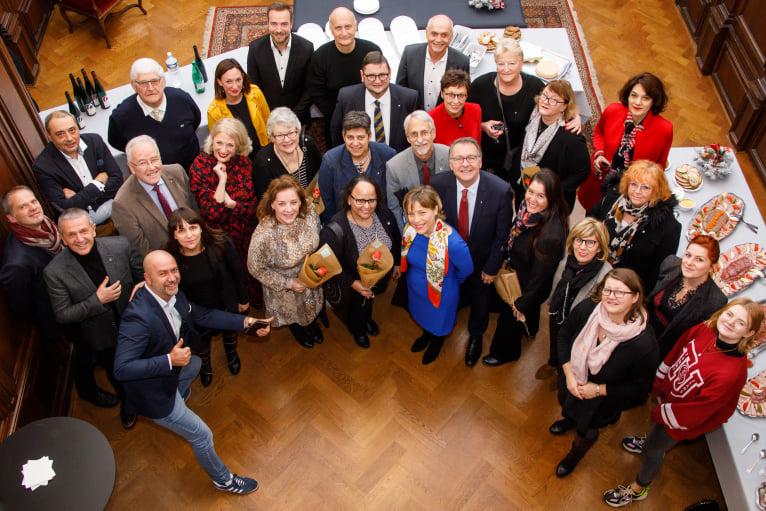 A photo taken between the members of Urbana, Illinois and Thionville, France during their meeting to celebrate the anniversary of their liberation from Axis Occupation during WWII.

Urbana, Illinois’s first partnership was established in February 2008 with Zomba, Malawi. Then, they built another sister city relationship with the Hazhu District of Guangzhou City of China, which occurred in May, 2012. Thionville is their most recent sister city, established in November 2014. Urbana, Illinois’s sister city community continues to grow as they build meaningful diplomatic relations with multiple countries.

The community has visited Thionville twice, and has received Thionville’s delegation once. The French sister city plans another visit to Urbana for its delegates in the fall of 2020 to continue their diplomatic efforts and maintain the relationship that they have.

The Sister City of Urbana strives to expand their French partnership with an emphasis on arts performance exchanges. Further, they are moving towards entering a memorandum of understanding with the city to function as a non-profit organization.

Urbana and Thionville’s sister city relationship is a great example of diplomacy and global partnership, celebrating together each group’s successes.